SCANLAB GmbH is marking its 30th anniversary as an OEM manufacturer of scan systems that guide and position laser beams. Residing in the Greater Munich area, the supplier of high-quality laser technology components has successfully practiced a one-site strategy. With 30 years of photonics market presence, the pioneering company looks back at continuous growth while also being well positioned for the coming years. 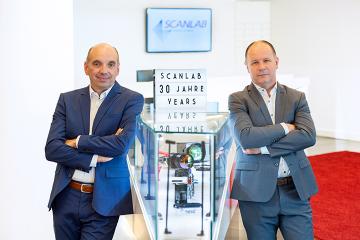 Founded in 1990, SCANLAB began small. For its first five years, the company’s fewer-than-ten employees worked from a subleased 100 m2 office in the Munich suburb of Planegg. A broader audience saw its self-developed scan head and associated control electronics for the first time at Munich’s 1995 Laser tradeshow. The system attracted considerable interest along with several orders – and a success story commenced. By 1999, the company had already hired its 30th employee.

Meanwhile, SCANLAB developed into a system supplier, offering a diverse range of galvanometer-based scan solutions. Suitable control electronics and assorted software products rounded out the product palette. The company continues to keep its Research & Development, production and customer service departments, along with most of its sales team, in a single site in Puchheim, near Munich. By this means, all expertise is bundled under one roof, which leads to efficient pathways and quick reaction times. Consistently positive business growth in recent years confirms the strategy’s correctness. Today, SCANLAB employs some 380 employees from 38 nations, and supplies customers across countless European, Asian and North American countries.

When asked about his secret to success, CEO Georg Hofner replied: “Always striving for organizational flexibility, as we see change as an opportunity. Afterall, technological and societal changes are facts of life. Companies must show some resilience and be able to respond adaptively. We’ve succeeded at doing this for 30 years and we aim to continue.”

Solid fundamentals and financial independence also contribute to the company’s favorable prospects. Despite major challenges, like the current Covid-19 pandemic, only limited course corrections were necessary. The only downer, which the management calls, is that the anniversary in 2020 cannot be celebrated as it would do the occasion